Most states allow owners and officers to include or exclude themselves from workers comp coverage depending on the entity type and percentage of ownership.

Election/Rejection of coverage under state laws.

Generally, executive officers of a corporation are automatically included for coverage under each states' workers comp laws. Officers must file for exclusion from the policy. Partners and sole-proprietors are generally exempt from coverage, but they may elect to be included on the policy. Each state has different state laws and form requirements for owner inclusion and exemptions. Visit our Insurance States page to find owner rules for your state.
Owner Exclusion Questions? Call 888-611-7467 for a Workers' Compensation Specialist

Who is Exempt from Workers Compensation Insurance?

What is a Workers' Compensation Exemption?

Each state sets its own rules for when and how some owners can waive or opt-out of a workers comp policy. Some of the factors used to determine the exclusion rules include the entity type, the industry, the percentage of ownership in the business and the number of business owners. Some states have very clear rules thar are easy to follow. Other states require notarized documentation to be filed every year at renewal. Exemption rules generally have a default status indicating whether an owner would be automatically included or automatically excluded, depending on the above factors.

In most state, executive officers of a corporation are automatically included under a state’s workers compensation act by default. However, they may file for an exemption from coverage. Partners and sole proprietors are generally exempt from coverage under each states' act. They may elect to opt-in for coverage.

It is the responsibility of the business owner and/or their agent to determine what exemption options are available to the business owner(s) under each specific states' laws. This determination should be made prior to purchasing a policy. Failure to properly document an owners election or rejection of coverage will negate the owners desired intent and the automatic state rule will apply. The owners wages will be treated as if no election or rejection was made in accordance with state law, and premium be charged at audit. Many business owners overpay for workers comp insurance due to the incorrect documentation and proper filing each year.

How to be Exempt From Work Comp Coverage?

In many states, a signed Acord 130 form indicating the owners' exemption preference is all that is needed. This form simply needs to be sent to the insurance company when the coverage becomes effective. Your agent should send the form to the carrier and the carrier will notify the state. The process is repeated at each renewal.

In other states, the process of owner exemption or owner inclusion can be more complex and tedious for business owners.If certain owners choose to elect or rejects owner coverage, state specific forms are required to be filed with the state and/or the insurance provider. Some exclusion forms may even need to be approved by the appropriate state agency before becoming effective. If such an exemption or election is desired by a business owner, the appropriate forms and documentation should be forwarded to the insurance company by the agent prior to binding coverage. Otherwise, the payrolls for the owners will be treated as if no election or rejection was made in accordance with state law, and premium will be charged.

Agency producers and employers can avoid additional premium charges from their insurance carrier by completing these election or rejection forms with the application for insurance. Without the forms, insurance companies will generally charge premium for owners even if the intent was to elect or reject.

Some of the states listed above require owners and officers to sign and file specific state inclusion or exclusion forms depending on how the business is organized. Many states refer to these forms as Notice of Election to be Exempt from Workers' Compensation Insurance. Other state forms are referred to as Notice of Election or Rejection of Workers' Compensation Coverage.

As an example, a lot of states automatically require insurance companies to include corporate officers under a workers comp policy; however, the state may allow these officers to file an affidavit allowing them to be excluded from coverage. On the other hand, many states automatically exclude sole-proprietors and partners from coverage; conversely, the state may allow these owners to file an affidavit requesting to be included for coverage. Some states allow these affidavits to be filed with the carrier. Other states require the signed notice to be filed with the state. Sometimes these forms must also be notarized. In some instances, the business will receive a Certificate of Election to be Exempt from Workers Compensation.

It's not uncommon for business owners to want to take steps to save money on their insurance. Many states require strict documentation and affidavits for owners because of prior lawsuits and legal issues involving excluded owners and officers. Owners often assume their health insurance will cover any work comp claims and can't imagine ever filing a claim on their own policy.

Health insurance specifically excludes work-related injuries unless there is a rider attached to the policy adding business coverage. Additionally, health insurance does not cover disabilities or death claims like workers' compensation insurance. While a lot of employers in white-collar industries are not likely to get injured or file a claim, their rates are often so inexpensive that it makes more sense to include themselves for coverage rather than elect to be excluded or exempt.

Owners and officers in higher risk industries often elect to be excluded from coverage in order to save money on their work comp premium. There are countless examples where excluded owners have been injured on the job and were left with no medical coverage or disability income. The results can be much worse than the cost of coverage for business owners. Owners need to weigh the pros and cons. On average, over 50% of our customers choose to be exempt from coverage when its a legal option available.

Each state also set rules for owner and officer payroll minimums and maximums for workers' comp rating purposes. Sole-proprietors and partnership often have a set payroll amount that must be used to calculate premium for the owners who are not excluded, or exempt, from coverage. Officers and LLC members generally have a minimum payroll amount that can be used as well as a maximum payroll that can be used for premium calculations.

Minimum and maximum payrolls used to calculate premium for owners does not have an effect on the medical portion of coverage. Medical is paid for by the carrier regardless of the amount of payroll used to calculate the cost of coverage. However, any short-term or long-term disability payments are determined by the owners average payroll wages prior to fling a claim for short-term or long-term disability. A higher payroll provides a greater amount of wage replacement if a temporary or permanent disability occurs. Most states require insurance companies to pay two-thirds of the average wages used to calculate the policy premium for owners.

Most insurance agents are generalists. They're not experts on workers' compensation coverage and often don't know when an owner or officer can choose to exclude themselves from a policy. Conversely, they don't know the rules for owner inclusion either. At Workers Compensation Shop.com, we think employers should know their rights and make their own informed decision as to whether or not they want to be included or excluded (Election of coverage or rejection of coverage) from their workers compensation policy.

Let one of our national workers compensation insurance Specialists help you determine if your state and legal business status allows for owner and officer inclusion and exclusion. We'll make sure you know your rights and properly file any required state forms with the insurance company and your state's Department of Insurance.

Get a free insurance comparison today and see if your business qualifies for lower rates.

How Does Workers' Compensation Work? 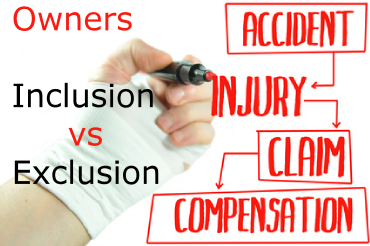 Workers' compensation waivers are state approved forms that enable specific individuals to opt out of state required coverage. The vast majority of states do not allow any employee that is not an owner of the business to waive their right to coverage. Most states require that coverage encompasses all employees and sometimes even 1099 Employees.

States that allow these waivers have very specific definitions as to who qualifies for a waiver. Most workers' compensation waivers are required by bigger contractors that utilize small independent contractors for certain jobs or projects.

Every state has its own laws regarding who can be exempt from coverage and how the process works. Some states have developed notable exceptions to state coverage requirements that may include one or more of these permissible exemptions:

Improve Cashflow
Pay As You Go

Get the Best Workers Comp Insurance for Small Business 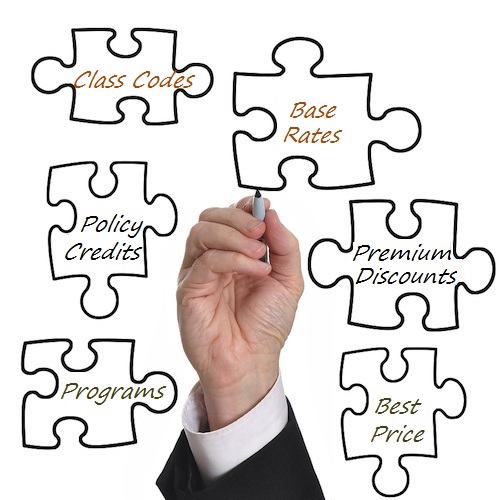 Our Quote Process Makes us Your Best Choice for Getting Coverage

Let us negotiate the lowest rates for your workers' compensation coverage. Give us a try at 888-611-7467
Start Your Quotes

See How Workers' Comp Works in Your State?

Ready to Start Your Quote?

Have an Agent Contact Me
Talk With a Work Comp Specialist

At Workers Compensation Shop.com, we've been a leader in workers comp coverage since 2005. We've built proprietary technologies to track state laws and better manage the processes for owner exemptions. We also track the average rates and cost of coverage for most class codes and states.
Give one of our workers' compensation consultants a call today at 888-611-7467 to see if your business qualifies for owner exemptions and lower workers' compensation insurance. You'll be glad you did.
National Agency Number: 8847381
National Producer Number: 5064979
Contact a Work Comp Specialist